Safety is our main goal

The data processing unit works with a fiber optic cable, which is used as a sensitive element to determine the vibration of the fence or the ground as a result of the physical impact on it by the intruder.

The armor of the fiber optic cable makes it resistant to surge current. The optical cable is not sensitive to radio wave interference and can be used in close proximity to generators, radars, radio beacons, power lines and other sources of radio emission. The service life of the cable is more than 25 years, the permissible temperature of its operation is from minus 60 to + 70 °С. At the same time, the cable is a completely passive device that does not require power on the protected perimeter and does not create any radio interference for other equipment.

The sensitive part of the cable can be located at a distance of up to 15 km from the data processing unit, which allows it to be placed in a guarded checkpoint and collect extended perimeters without the need to organize the protection of object cabinets and equipment.

The detector is supplied fully assembled at the factory, to start it is only necessary to mount the cable on the fence and provide the signal processing unit (central unit) with AC power of 220 V, 50 Hz.

Repair of the cable, in case of mechanical damage, can be carried out directly on the fence using conventional optical fiber splicing equipment.

The sensitive element can be made with a single cable for the entire perimeter, or divided into two parts to organize two differently directed lines.

The cable is divided into six (for Topol-VO-6), twelve (for Topol-VO-12), twenty-four (for Topol-VO-24) or forty-eight (for Topol-VO-48) sensitive zones, up to 300 meters each (recommended - 100 meters for difficult operating conditions and fences without presenting special requirements for the rigidity of the structure and the quality of installation).

The cable can be used not only to protect the perimeter, but also to organize a local area network (LAN) for transmitting data, for example, from a video surveillance system or for aggregating disparate TOPOL-VO signal processing units when building long perimeters. The required number of free cores is specified when ordering the detector.

The cable can be mounted: 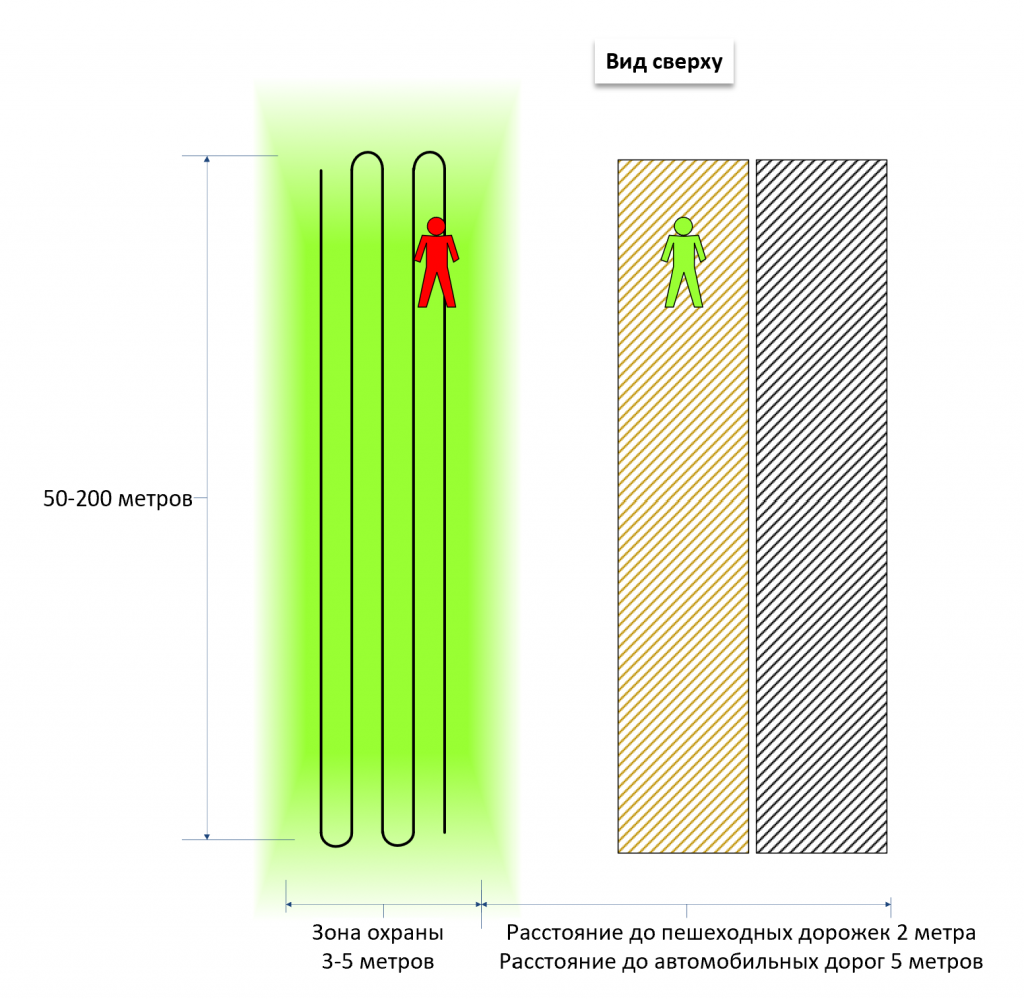 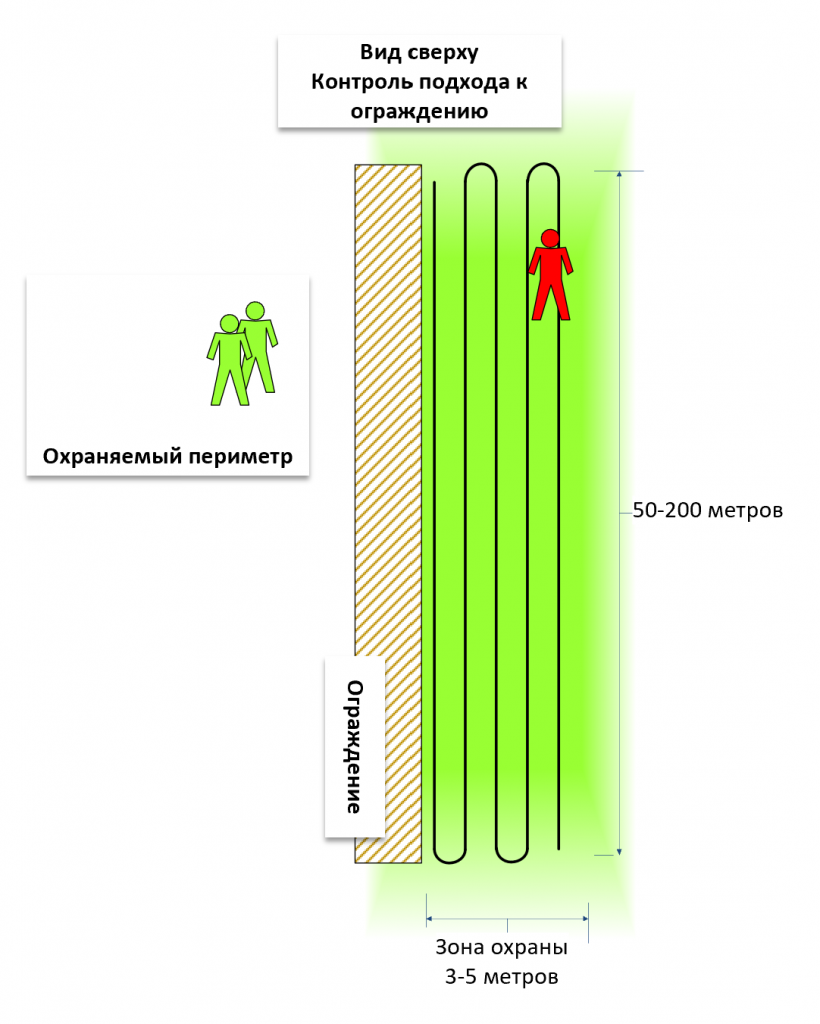 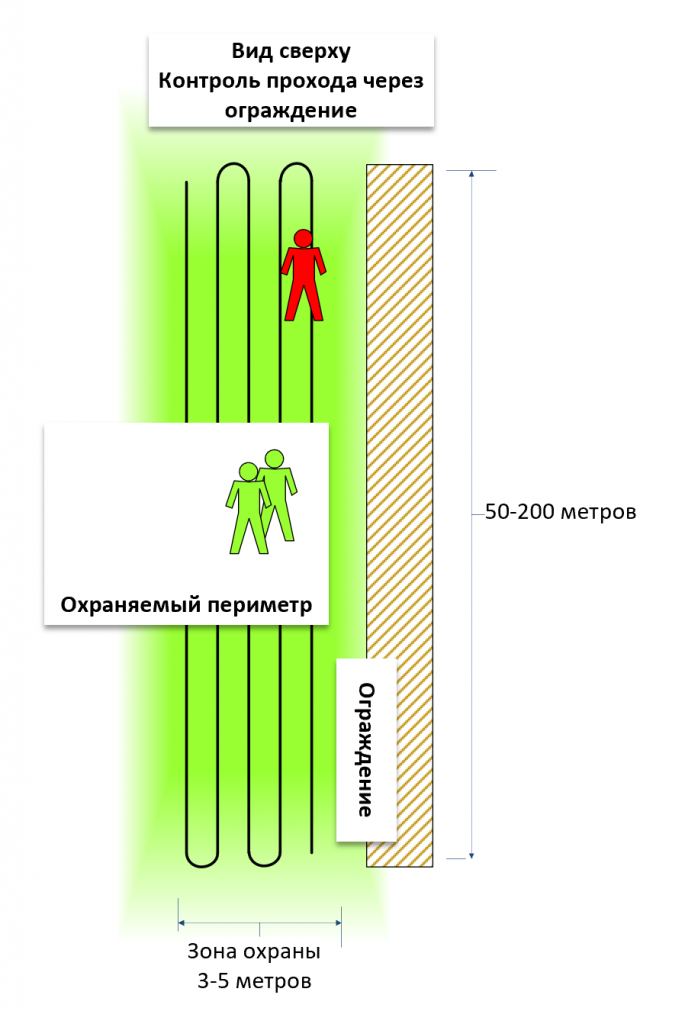 Upon special request, the cable can be made in a design that excludes the use of metals in the structure, to create boundaries that are not detected by technical means.

All mounting options can be combined in one cable to form a multi-terminal system using one central unit and one cable. 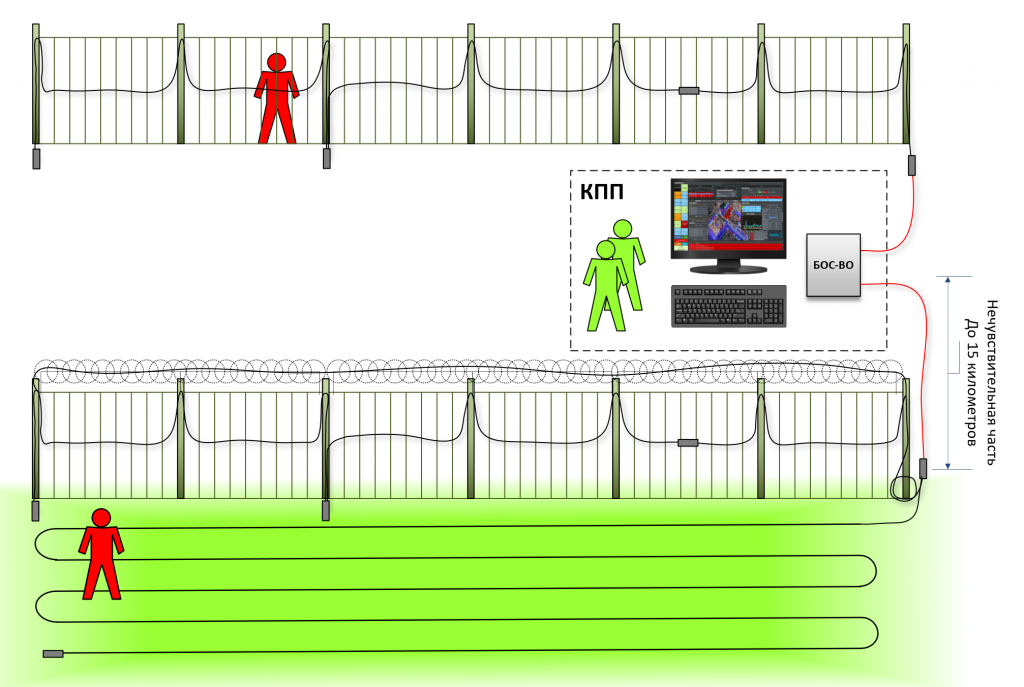 The second option is to connect zones with a separate supply cable, which is laid in a tray or dug into the ground. The advantage of this option is that if the main cable breaks, the detector loses communication with only one zone in which the break occurred, while the remaining zones continue to operate normally.

Regardless of the type of installation and connection, each zone of the sensitive cable uses eight-band frequency signal processing, which allows you to work confidently in any climatic conditions in a wide range of natural environmental and fence noise. Any frequency bands can be excluded from operation if it is impossible to eliminate the source that generates interference - for example, the railway generates an interference background in the low and medium frequencies, while high frequencies are attenuated in the ground, not reaching the fence.

When processing a signal, the TOPOL-VO detector allows the use of deep analytics of big data distributed in time and space. The main criteria of the analysis are: 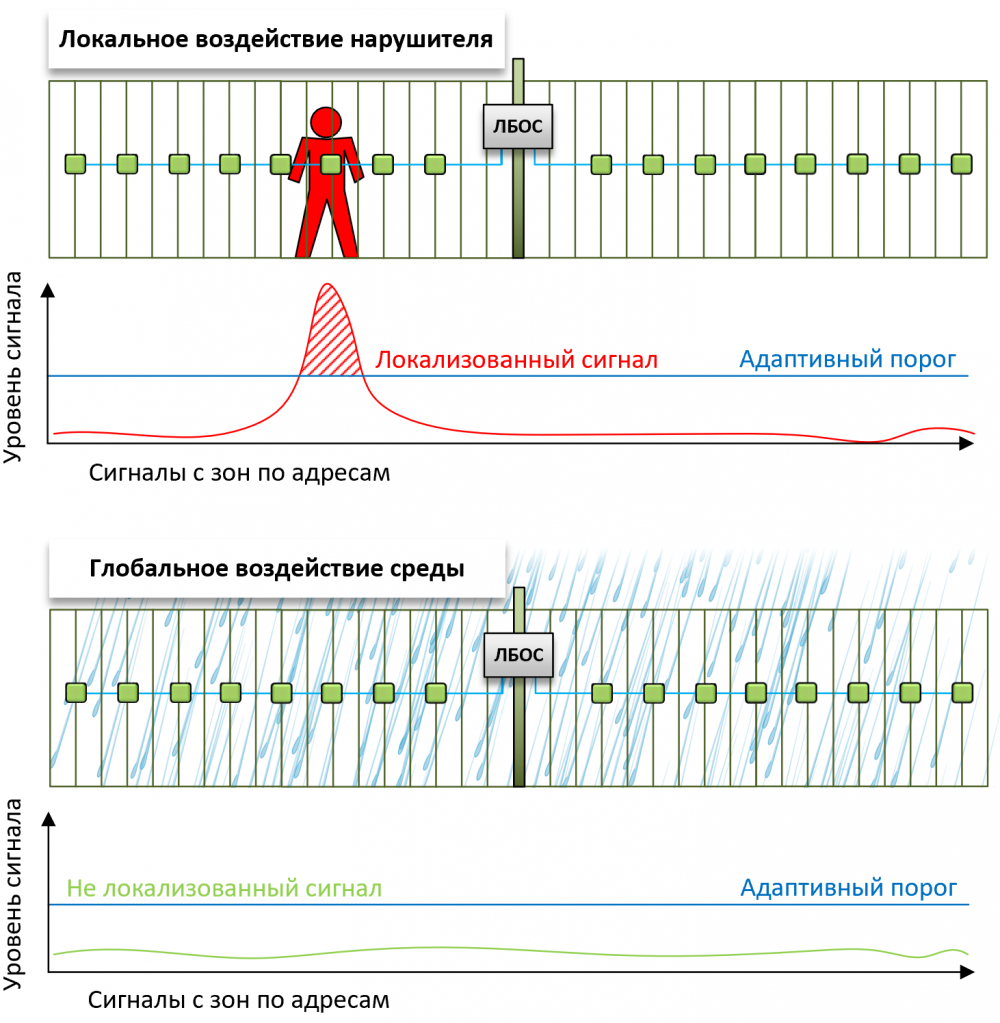 All types of analytics can be used simultaneously and in parallel to achieve a record high system noise immunity. Moreover, all zones can have several simultaneously operating settings to determine the type of intruder or unwanted impact, and its classification, followed by informing the operator about the type of detected threat.

Thus, it is possible to connect additional equipment for: 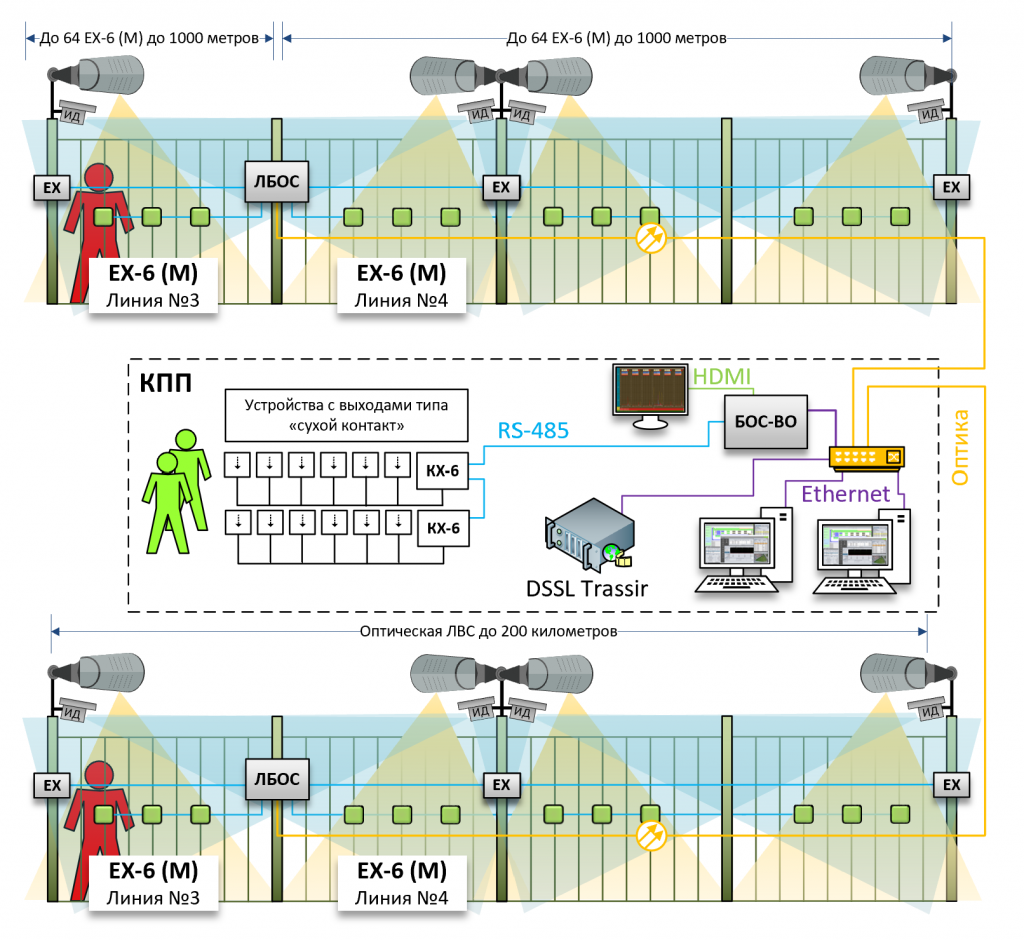 If additional equipment is located up to one kilometer from the central unit, then it can be connected via the RS-485 interface directly to the central unit. If the distance is greater, then, as in the case of the Topol-3 system, linear LBOS units are used, which can be included both in an existing local network and use a sensitive element to create a new local network. Each LBOS has two RS-485 ports, allowing you to form two lines of one kilometer each, and connect up to 128 six-port hubs and loop expanders, as well as up to 250 point addressable sensors.

The central unit has a video surveillance subsystem built-in and fully integrated into the operator’s workplace (in the basic version for 16 IP cameras, in the extended version up to 1000 IP cameras per unit) with the ability to:

Receive events from cameras using the unified ONVIF protocol, types of recorded events (motion sensors , line crossing, zone entry and exit, number of people in the zone, etc.) depends on the camera model. Events can be processed similarly to “native” sensors of the system and used at any level of building logical zones, reactions and other objects of the system failure and in case of any other events), including data pre-recording Data can be stored both on the built-in hard drives (optional) and on the client’s network drives . “. Each central unit has 12 built-in outputs, their number can be increased with the help of EX-6 loop expanders. For example, to broadcast all alarm messages from the 12-zone TOPOL-VO to the Fireball, it is enough to install one Signal-20. In addition, direct software integration with DSSL Trassir is available via the Trassir API. The central unit of the detector has a modular design and can be made in several versions:

The central unit has a large number of additional options and modules that allow organizing:

The data processing and decision making system can be delivered as software for execution on the customer’s servers.

It is also possible to output and broadcast all system log data to external database servers or customer file servers.

The system can be controlled both over the network and directly from the central unit, which allows you to organize an automated operator’s workplace at no additional cost. To do this, you need to connect a monitor to the central unit using the HDMI interface, as well as a USB keyboard and mouse.

To control the system via LAN, the central unit must be connected to the network where the client computers are located and the client software must be installed on them.

Additional modules allow you to organize an encrypted communication line between clients and units, as well as use multi-factor user authorization using biometric data or confirmation of the operator’s authority from the central control post.

The software is compatible with Windows, MacOS and Linux operating systems.